Lawn aeration and dethatching are two different processes, but they can work together to help your lawn. Aeration removes cores of soil, including their thatch layer, and creates paths for water and nutrient to penetrate thatch and compacted soil. This helps prepare thatch for removal and speeds the breakdown of existing thatch. Dethatching helps slice through thatch into soil and remove the barrier of thick, accumulated organic matter. 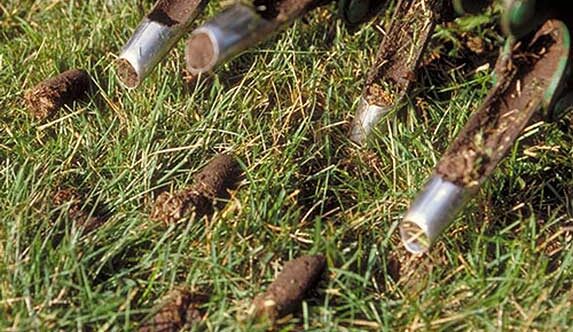 As the grass emerges from the winter snow and strives to grow and flourish, the tough Montana soil does not have too much to offer the little grass roots in shelter and nutrients. However, an aeration gives your grass its best chance to become lush, green and thick.

Not all lawns need dethatching, but when your lawn does need it, getting it done right is crucial to its future. Done properly, dethatching helps restore your lawn to health and keep it beautiful in years to come.

Aeration involves perforating the soil with small holes to allow air, water and nutrients to penetrate the grass roots. This helps the roots grow deeply and produce a stronger, more vigorous lawn. This is absolutely necessary here in Central Oregon as root systems creep higher and closer to the surface to receive water and nutrients during the winters.

WHY AERATE YOUR LAWN?

The main reason for aerating is to alleviate soil compaction. Soil compaction is the compression of soil particles. Compaction reduces total pore space of a soil. More importantly it significantly reduces the amount of large pore space, restricting air and water movement into and through the soil.

As the grass emerges from the winter snow and strives to grow and flourish, the tough Central Oregon soil does not have too much to offer the little grass roots in shelter and nutrients. However, an aeration gives your grass its best chance to become lush, green and thick.

By the time fall rolls around, the perforations from your spring aeration have usually filled back in with grass seed and soil. A fall aeration gives your lawn its best chance to get oxygen, nutrients and water into the soil through the winter months.

REACH OUT TO US FOR A QUOTE

Dethatching, or power raking, is only performed in the Spring. It is done with a machine that on the underside has vertical spinning teeth, basically a motorized rake. It is the process of raking old dead grass, old leaves, and unbroken down thatch out of your lawn’s Root Zone. Power Raking is not as important as Lawn Aeration for some lawns. Lawn Aeration itself will help with thatch if the thatch level is a ½ inch or less.

Dethatching is not for every lawn but depending on the lawn it could be essential. If water doesn’t seem to want to penetrate the surface of the lawn, has necrotic ring spots, or has areas where you can see good green grass trying to poke through a lot of brown and seems to be struggling or “choking”, your yard could be carrying excess thatch and may need to be dethatched. 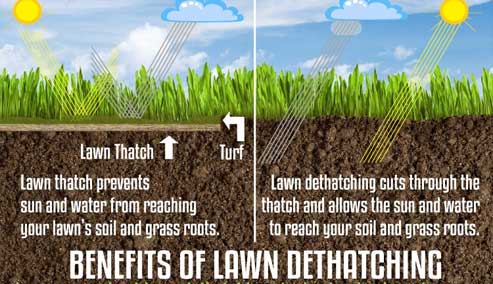 Dethatching too deep can be damaging to the lawn making longer recovery time, but dethatching done properly will remove matted turf and will promote a quick Spring green-up by letting air move to the root zone and warm the turf. dethatching is a great idea if you’re going to over-seed, (out with the old and in with the new). Dethatching also allows for deeper Lawn Aeration holes. By removing a thick thatch layer, the aeration machine has less material to go through to get to the soil. When completed you will see all the buried thatch that has been brought to the surface. We then rake and/or mow all the debris.

The process usually takes a little over an hour, in which raking thatch by hand with a metal rake may take someone several weekends!

REACH OUT TO US FOR A QUOTE

All of our products that we use are Eco Friendly and good for the environment.

Our team is hardworking and provides quality you can trust.

Our weekly and bi-weekly services are carefully planned to provide optimal results.

Are list of comprehensive services can be customized to fit your specific needs.

Our crews are trained and use the proper PPE to keep everybody safe.

Our team makes an effort to leave every property looking better than we found it.

Some of Our Work

We have been working in Central Oregon for over 10 years, and we love serving our customers. Take a look at some of our work:

VIEW OUR GALLERY
VIEW OUR SERVICES 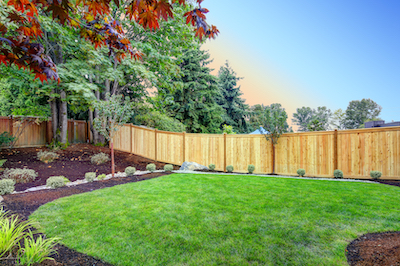 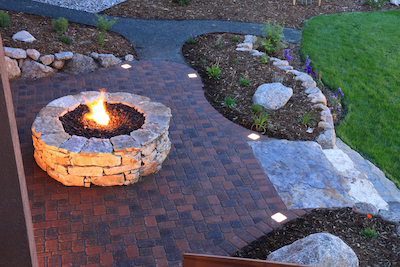 Kevin not only does a wonderful job on my lawn but spends time each week interacting with my boys. They love him so much they look forward to the day he comes by!

Your perfect yard awaits. Let’s get the ball rolling on your new Jade Landscaping yard.

GET A QUOTE
Go to Top